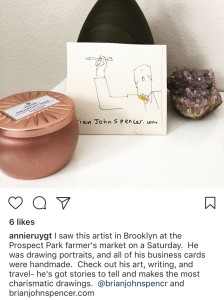 Here’s what clients and people around the world are saying about me and my work:

“Brian is a bit like the Dante Gabriel Rossettti, or Ruskin or Duchamp who frankly – does a bit of everything. But importantly, Brian’s work is all based around the integrity of the idea, rather than the specific medium. Rather than having Hemingway, de Beauvoir, Stein, Gris and Joyce sitting in Les Deux Magots, Brian is doing it online.”
– Helen Hammond

“The man sitting in front of me was more interesting than anything said by the panel. He was quietly and with amazing skill constructing a cartoon of the panel even as they spoke. His name’s Brian John Spencer and if you google him you’ll find out more about him and his talents. Speed and accuracy: there’s not much of it about.”
– Jude Collins (more from Jude here)

“Everyone should have a Brian John Spencer hanging in their study.”
– John-Paul Whearty, satirist

“My favourite photo/representation of me ever.”
– Niall Donnelly (slam poet) on Live Drawing

“Even at a distance [Brian’s] style was unmistakeable.”
– Ian Knox, Irish political cartoonist

“One of the best self-publicists I’ve ever met – genuinely – is Brian John Spencer. Wish I could be as good as Brian. He’s relentless.”
– Lyra McKee, journalist

“Brian also has the backbone to deal with the accompanying trolls. I would cry.”
– Leanne Ross, PR consultant

“Brian Spencer was a real problem for the opposition. An unpredictable player who played the game by instinct, Brian tackled and disrupted opposition ball so much that sometimes we thought there was two of him on the pitch. Luckily there is only one Spencer and he is most definitely unique.”
– Richard Headley and Gavin Monteith, RBAI Rugby 1st XV management, 2006

“Kerouac in a hat.”
– Stephen Hillis

“Jeez, I admire multi-tasking, but does Brian really have to make the rest of us look so f*cking lazy?”
– Willis McBriar

“What a talent Brian is.”
– Liam Beckett

“Brian John Spencer who never ceases to amaze me with his knowledge of the minefield that is social media law.”
– Orna Young

“Brian you are such an asset to any conference. Really clever how you visually depict key messages from speakers.”
– Mark Taylor

“My name is Tim and your did a water color of me at McSorley’s last night. One of the best gifts I’ve ever gotten. Wish we could have talked more. Are you only visiting NYC from Belfast? If you’re only visiting, next time the beers are on me. Again, I appreciate the kind gesture. I think I’ve told 100 people about it already.”
– Tim Hansell who I drew in water colour in the East Village, New York

“Brian is articulate, reasonable and comes across without the traditional condescending tone that so many unionist politicians have. If unionism were to wheel out a dozen of people like him every year to present to Americans, on-lookers and king-makers and the like then world wide sympathy or indeed the sympathy of the history books might be less likely to smile upon the PIRA which is what it seems so many unionists are scared of. Do something about it or quit gurning.”

“Brian John Spencer is a model citizen of post-Troubles Belfast — the “forward Northern Ireland,” as he calls it. A self-declared Protestant atheist, he is as passionate about his hometown as he is fearful for it. A painter and political blogger turned lawyer with a hipster beard, the 29-year-old took me on a stroll through his city: the Lisburn Road with its gourmet shops and art galleries, and the Cathedral Quarter with its thriving night life.

He stopped me in front of an engraving that hangs next to a pub wall. This stone plate, Brian said, carried his favorite poem, by Maurice Craig: “It’s to hell with the future and live on the past/May the Lord in his mercy be kind to Belfast.”

Why is this prayer-poem so important to him? Because, Brian replied, he is anxious about the re-emergence not so much of widespread violence but of social regression. The forces of “backward Northern Ireland,” he said, still have the unfair advantage of ferocious temper over the new, cool Belfast: “There are these deep ancestral passions of Orange versus Green. Like many Trump supporters in the U.S., many disaffected people here believe their way of life is in lethal danger. What they have is their flag and the vanity of small differences. When they shriek, they shriek very loudly, when they lash out, they lash out very violently, in a way the cool cannot engage.”

Brexit has reinforced these anachronistic passions. At its base lies the promise of a strong sense of identity (we, the British, against them, the immigrants). People like Brian fear a vicious cycle: The growing legal uncertainties under Brexit could make many companies move from Belfast to Dublin; a rise in unemployment would increase frustration, catalyze a brain drain, radicalize society and endanger the social and political progress achieved over so many years.”