Biffo On His Deathbed – acknowledgements to Walton Ford

Posted 12 years ago by admin 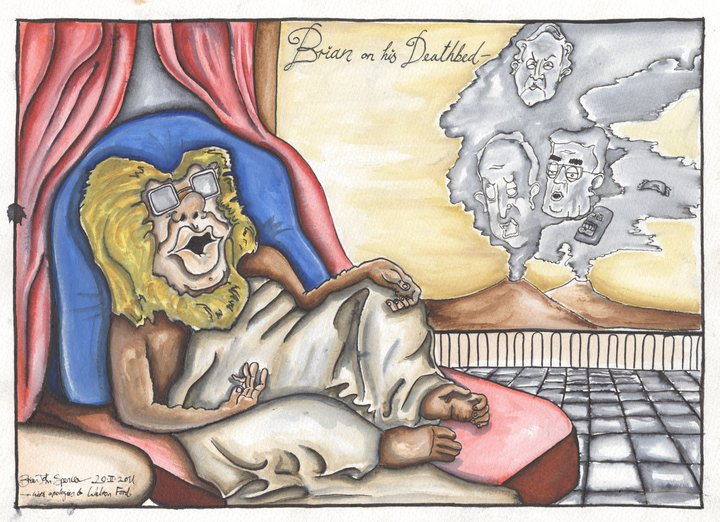 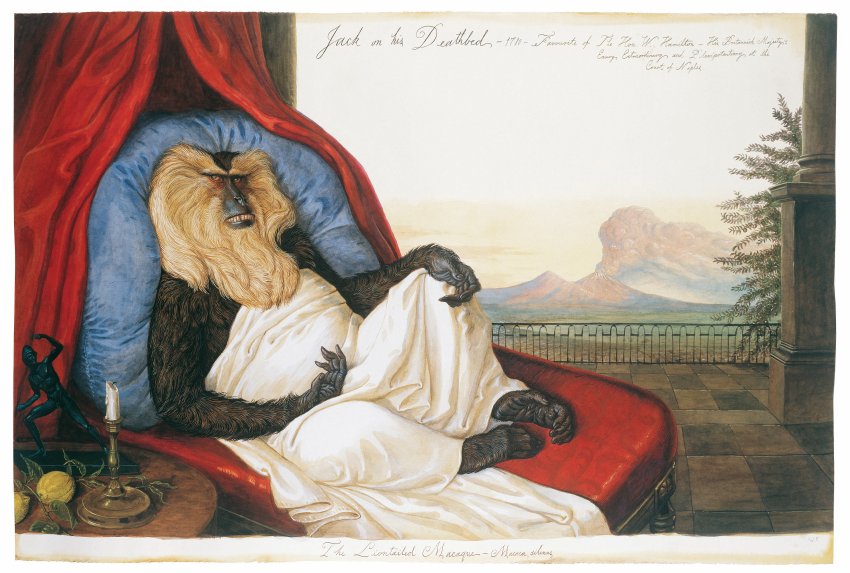 This is my drawing of Brian Cowen, former Irish Taoiseach in his last days in office. I’ve used a famous piece by renowned artist, Walton Ford as a template. So full acknowledgements must be given to Walton. For those interested here’s a link to the original piece I modeled this bit of work on, called “Jack on his Deathbed”.

Here’s an excerpt from a May 22 2005 article by Annette Grant of the New York Times on Walton Ford:

ON a recent Sunday, Walton Ford was searching for his 17th-century bestiary, one of several sources for his animal paintings. As he poked around his chaotic studio, overlooking a former lumberyard here, he cheerfully reeled off tale after tale about what he has sought and what he has found. 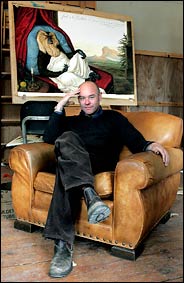 Mr. Ford in his studio in Great Barrington, Mass., with the painting “Jack on His Deathbed” in the background.

“I’m looking at this stuff all the time,” he said, waving in the direction of a pile of illustrated books on hunting and trapping. “I get all my inspiration from things I read or see. There are very few times that an image pops out at me from some inner recess of my soul or that kind of stuff.”

With this method, Mr. Ford produces watercolors and prints that are at once naïve and sophisticated, obvious and oblique. His style is superrealism (in the tradition of John James Audubon and Edward Lear) overlaid with surrealism (Bruegel and Bosch) and absurdity (R. Crumb and David Lynch). That beautifully rendered owl on a branch? Look closer. A trapper has wired him to the tree as bait to lure smaller birds. And that gigantic gorilla – where did he come from? A photograph taken by the hunter and naturalist Carl Akeley. In the photo the ape is dead (it’s the very one that is now mounted in the American Museum of Natural History in New York), but in the painting it is vibrantly alive again. And what is that in his paw? The skull of the man who killed him. Alas, poor Akeley.

Such true stories are the underpinnings of all of Mr. Ford’s work, which he once called “fake natural-history art.” He admits he is looking for “a sort of attraction-repulsion thing” in which potential violence is coupled with a good back-story.

Another example is a life-size painting of a monkey, “Jack on His Deathbed,” which is featured in a solo show of seven new works at the Paul Kasmin Gallery in Chelsea through July 2.

“This monkey, Jack, was owned by Sir William Hamilton, British ambassador to Naples in the 18th century,” Mr. Ford said, citing as his source Sir William’s letters, which described Jack grabbing a boy’s genitals and enjoying enemas. “I started thinking: ‘This is debauched. I’ve got to paint him.’ So, here he is, a decadent Hogarthian rake on his deathbed, with Vesuvius erupting in the background, which was actually happening as he was dying.

“Hamilton said Jack was a black monkey with a beige beard from the Malabar Coast in southwestern India. I have lots of natural history books here and I really got lucky. I found him in ‘The Book of Indian Animals,’ and he’s my model for Jack, who looks like he’s had his hair done, so extravagant, like Liberace if he was a monkey.”

Mr. Ford, who is 45, often “quotes” earlier artists. He is using, for example, the basic composition of Benjamin West’s “Death of Wolfe,” but replacing the British general and his mourning entourage with Carolina parakeets. For “Le Jardin,” the centerpiece of the Kasmin show, he lifted almost verbatim from the sketchbooks of George Caitlin, the American Indian painter, a scene of a blood-soaked standoff between a buffalo and a pack of white wolves.

Again life-size and produced as a triptych, this watercolor has more than one interpretation. Beyond being a nod to the vanished world of the Old West, it is a war of worlds and manners. It is a scene of incredible savagery set in a formal French garden with clipped lawns, an urn and topiary, a version of one Mr. Ford saw recently in Normandy. “I thought, ‘You take this American frontier and you bust loose,’ ” Mr. Ford said. “It’s every French person’s nightmare, and it becomes like Henry James, that conflict between European and American sensibilities.”

Stepping over watercolor paint boxes and rubber toy animals that belong to his young daughters, Mr. Ford began rooting around for a book by Leonardo da Vinci, the key to another current painting, “Ricordazione – Vinci 1452,” that shows a baby (one of the few humans in Mr. Ford’s work) with a bird. Not finding the book, he tells the story from memory.

“Leonardo’s writing about studying bird flight, referring to a bird called a kite. It’s almost like an eagle, frightening, with a three-foot wingspan. He writes that when he was an infant in his cradle, a kite came down and put its tail in his mouth and beat it against his gums and then flew off. He acknowledges that it might have been a dream, then he just drops the subject. But it’s as if he’s saying it was an augury, that God touched him as a genius. I’ve painted the infant really pulling the tail into his mouth, like taking the genius in.”

These fantasies of nature began to visit Mr. Ford early in his childhood in Larchmont, N.Y., when he started copying Audubon and later became a history buff, especially of the Civil War, in which his ancestors fought for the South. He attended the Rhode Island School of Design in Providence, where he met his wife, Julie, and moved to New York, where they lived in the Williamsburg section of Brooklyn and he made somewhat sinister paintings in the Hudson River School style.

Grants and carpentry kept the family barely afloat, and then, in 1994, Julie got a Fulbright Indo-American fellowship, and suddenly the Fords were in India for six months. Poverty was no longer just the Fords’ problem, it was a universal condition. Mr. Ford didn’t paint in India, but ideas about cultural tourism and the global dominance of Western aesthetics and products began to marinate.

Once home and relocated to the southern Berkshires, away from the art world he had sought to join, Mr. Ford seemed to find his stride and his true subject: animal as metaphor for man. He is not the first to hit upon the notion; artists as varied as Lewis Carroll, Edward Hicks, Max Ernst, Salvador Dalí, Alexis Rockman and Shahzia Sikander have played with the layers of text, subtext and sub-subtext in the world of the wild.

Yet Mr. Ford had hit a nerve with works like a portrayal of Fidel Castro as a crafty old Cuban red macaw that can’t be killed, and his paintings started, as he said, to “fly off the walls.” (The price range in his current exhibit is $20,000 to $300,000.) Some of his paintings are so precisely rendered that they look as if they could fly or jump right out of their frames.

This is no accident. Mr. Ford’s history-based realism comes from years of poking though moldy books in second-hand stores, where he discovered that what is now arcane and even considered bizarre was once common knowledge to every farmer.

“Anyone walking in the countryside would have seen this 100 times,” Mr. Ford said, brandishing an 1887 copy of “Camp Life in the Woods and the Tricks of Trapping,” by W. Hamilton Gibson. “This is a lost world. I can’t even imagine a place where there’d be deadfalls in the woods everywhere and snares and an abundance of wildlife constantly being trapped. There’d be big nets strung from trees, barrels full of birds going to market – just enormous quantities of flesh on the hoof and in the air. It’s a piece of American history I don’t remember being taught in school.”

And with that he was off to find out what was in birdlime, a sticky substance spread on limbs so that small fowl landing in it would be held fast. When he paints birdlime, he wants it to look like the real thing.